Contributing to a Hugo Theme - The Castanet and Hugo Community Themes

During the 2020 Festive Break, I had a lot of time on my hands. I took 4 weeks of my Annual Leave, which meant I had the majority of December to personal time. Personal time / time off is great, but I also wanted to push myself and catch up on some pieces that were on my personal learning or achievement list for some time. I started refreshing my knowledge around Rails (having developed in it some years ago, it’s progressed quite a bit!), NodeJS, GoLang and Rust. All interesting to learn, and I’m sure I’ll be continuing on my journey with these throughout 2021. But that’s not the point in this blog post. One of the activities that I kicked off was contributing into the Hugo Community. Read on to find out more.

During the 2020 Festive Break, I had a lot of time on my hands. I took 4 weeks of my Annual Leave, which meant I had the majority of December to personal time

Personal time / time off is great, but I also wanted to push myself and catch up on some pieces that were on my personal learning or achievement list for some time. I started refreshing my knowledge around Rails (having developed in it some years ago, it’s progressed quite a bit!), NodeJS, GoLang and Rust. All interesting to learn, and I’m sure I’ll be continuing on my journey with these throughout 2021.

But that’s not the point in this blog post. One of the activities that I kicked off was contributing into the Hugo Community. There are two main areas where I contributed -

I’ve recently taken on the role as Co-Organizer for the Azure Thames Valley Meet-up Group. I’ve been chatting with several other organisers/co-organisers about the aspects they’ve learned in setting up their own Azure user groups - what works well, what doesn’t work well, etc. There is a theme around having a presence (i.e. a site) and Twitter. Twitter is easy to solve, but the site could be a little more challenging. Why challenging? Well, we need to take into account that this is a side-hustle. This is not the main day-job, and should be lightweight and easy to manage, ideally not costing much either, as user groups are typically sponsored on a session by session basis. Even then, you would want the sponsorship to go towards the main purpose of the user group - the community of individuals that are attending your event.

So, with all that in mind - I came up with the idea of the Hugo Community Theme. The intent behind it, is a flexible Hugo theme that can be used in community groups, or conferences to showcase events, speakers and community resources.

Why Hugo? First, let’s start with “What is Hugo” as there may be some readers who have not used/do not know what Hugo is. Hugo is a static site generator written in GoLang (don’t worry, you don’t need to know GoLang to use it!). This means that it converts Markdown pages into HTML when you build/compile/render the site.

For local development, you can use the “Hugo Serve” command to get your local instance of the site updating in real-time as you make edits. For a production deployment, you would typically compile the site into the static assets (HTML/JavaScript/CSS/Images) and push that to a platform.

Take for example CloudWithChris.com. This site is built using Hugo, uses the Castanet theme (as mentioned earlier, thank you again Matt Stratton!) and is hosted on Azure Blob Storage, fronted by Azure CDN. As an experiment, I also have the assets pushed up to AWS S3 and GCP’s Cloud Storage, and have an open item to load balance origins across all 3 endpoints (perhaps that could be another blog post).

As you can see, Hugo checks a number of those requirements. Easy to manage (i.e. uses markdown). Low cost (as storage is typically very cheap, and CDN costs are pretty cheap as well. (Both have the benefit of having a cost proportional to the number of users that you would have visiting the site; low number of users, low cost).

This is how I arrived at the conclusion that I wanted to build a theme for Hugo. Fortunately, there are a few good resources out there about getting started -

So overall, after a few weeks of work and learning how Hugo works (e.g. Functions, rendering orders of pages and numerous other aspects), I almost have a minimum viable product. There are a few “paper cuts” that I’d like to fix, which you can checkout over on the Hugo-Community Project Board.

There are four scenarios that the theme addresses -

As part of this theme, I wanted to make it easy for speakers to be discovered, so displaying speaker profiles prominently on the site with a list of events they had attended was a key requirement.

You’ve probably already heard in my videos that the reason I am podcasting, blogging vlogging, etc. is to give back to the community. So, given that this theme focuses around community, it made sense to also have a section for community resources.

Now of course, knowing my background - You’ll know that I wanted to automate the build and deployment aspects as well. For this, I’ve been using GitHub Actions and Netlify. I’ve chosen Netlify as the target deployment as they have some great free hosting options for Open Source projects, and they also integrate well into GitHub, allowing you to get preview links directly in the UI (particularly useful when you’re working on preview branches and committing PRs!).

On the GitHub actions side, this is an evolving story. There are aspects in there including HTMLProofer, Markdown Linting, Building the site across various combinations of Node.js versions and Hugo versions. If you’re interested, feel free to take a look over on the GitHub repository under the GitHub workflows folder.

Overall, this has been a very fun project to kick-off and get to know the Hugo Community (when I say Hugo community, I mean the people who build/support Hugo, rather than my theme Hugo-Community!). I’ve been quite active over on the Hugo Discourse, both in asking questions to support my theme’s development, as well as supporting others where my knowledge can help contribute back to the community.

Every month, the Hugo community nominate two users to be their “New User of the Month”, based upon their contributions to the community, the number of views they have received on their posts, and who has interacted with those posts. To my complete surprise (and delight), I was one of the two users for December 2020, so a big thank you to the community, not just for receiving this, but being so welcoming and helpful!

So, a few thoughts to wrap up this blog -

If you’ve made it this far, thanks for reading! As always, would love any feedback that you have - so please drop me a tweet as well! I hope that this blog has been useful/insightful on how I’ve spent some of my time over my festive break.

Now, until the next blog - Bye for now. 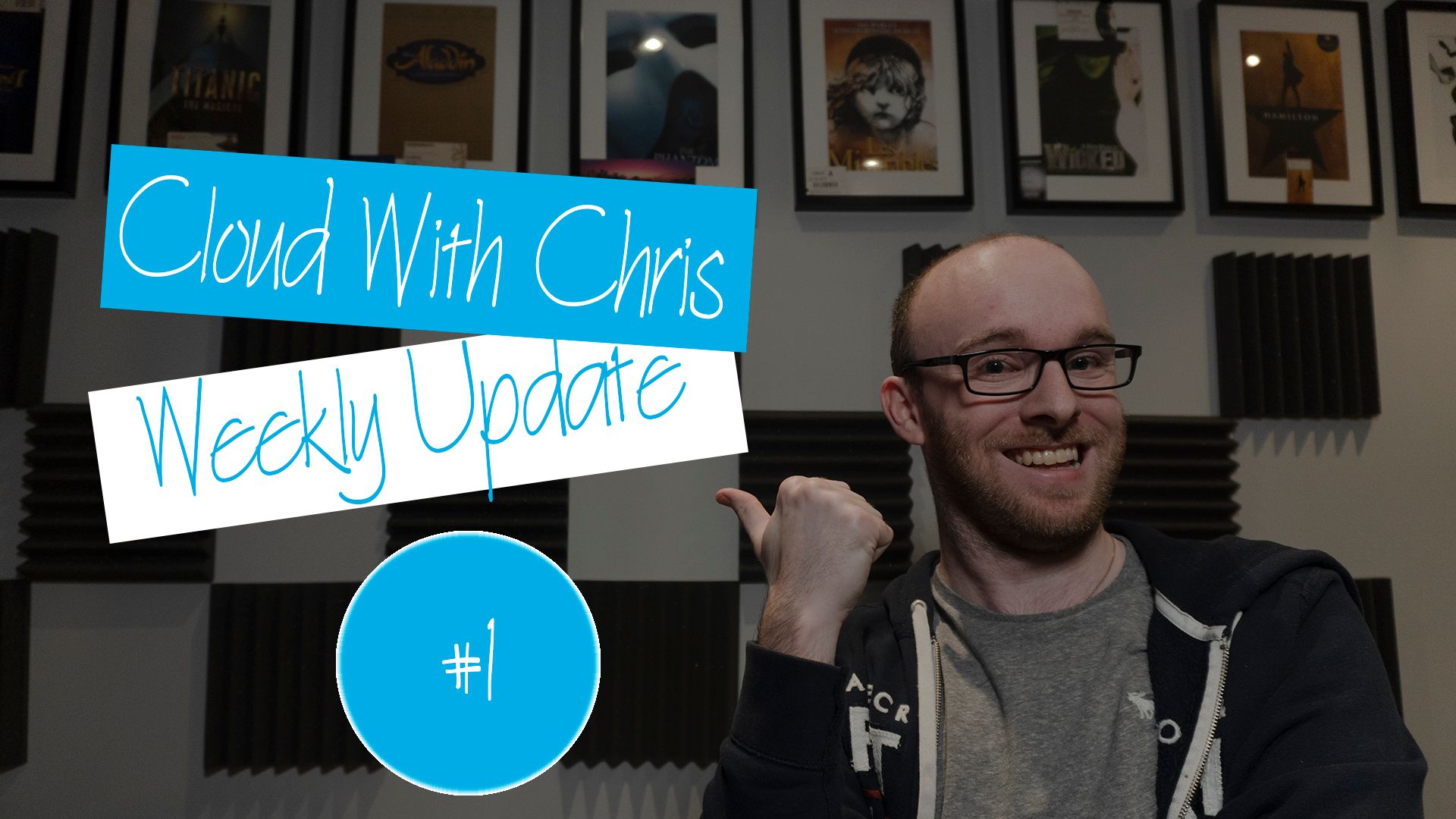 In this video, Chris sets off his weekly technology vlog updates talking about some of the things he worked on over his December break including OSS Contributions. He also talks through some updates from the month of December across Azure, GitHub and Azure DevOps. 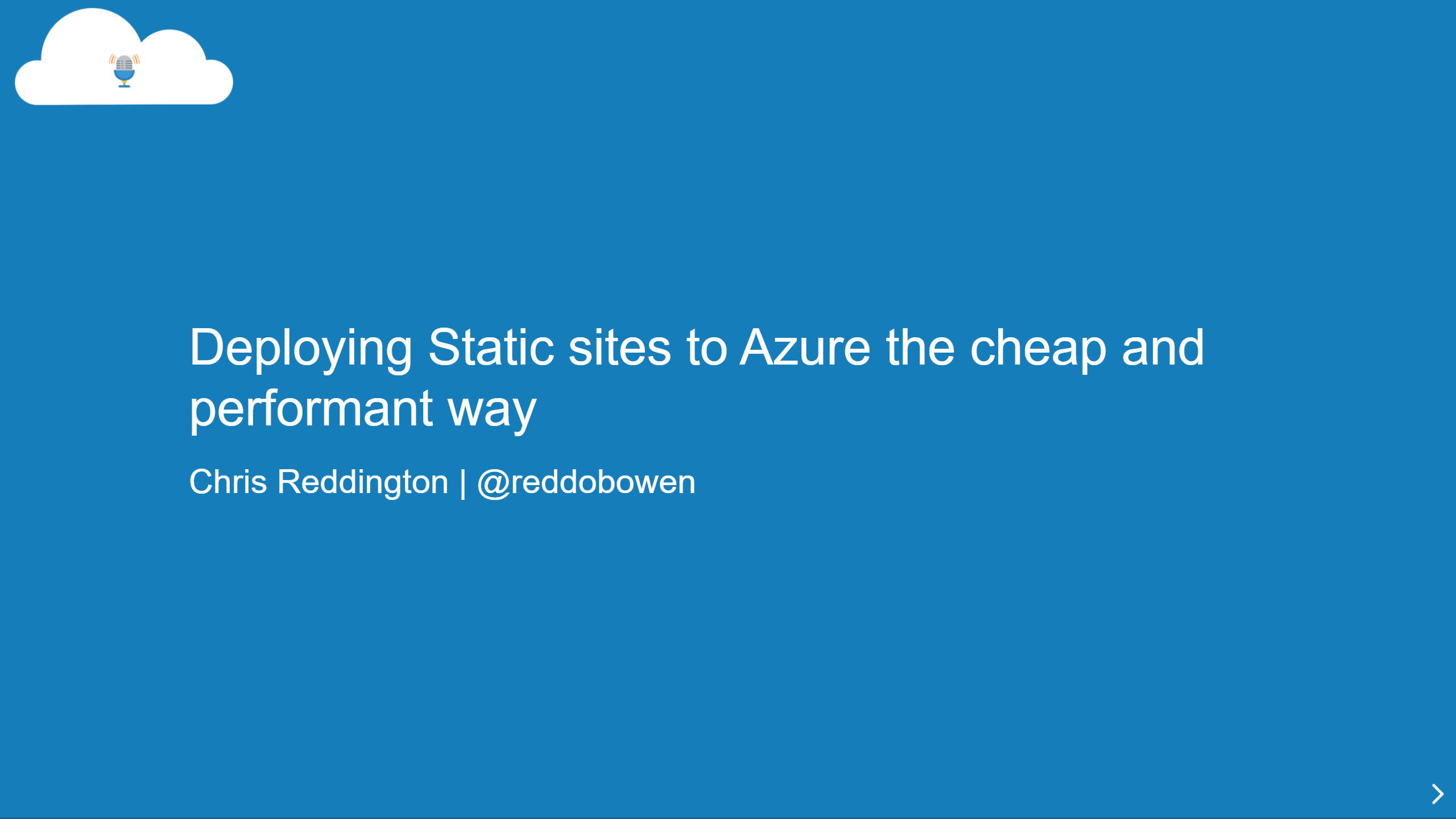 Deploying Static Sites to Azure the cheap and performant way

Did you know that static content can help you build performant sites that easily scale globally? Better yet, they can be incredibly cost-effective! Join Chris, as he talks through JAMstack (not related to Paddington bear - I promise!) and why you should care about it, Static Site Generators such as Hugo, Azure Hosting Options - Azure Storage vs Azure Static Web Apps and Combining Static sites with Serverless APIs