I’ve recently been on a journey. I’ve recently come across a number of accessibility issues on cloudwithchris.com. I’ve been working on making the site more accessible, and I’ve also been working on making it more inclusive. In this blog post, I’m going to outline some of my findings, the tools that I used to identify those, and how I’ve worked to fix them. This is an ongoing project, so I’ll provide further posts as it makes sense.

I’ve recently been on a journey. I’ve recently come across a number of accessibility issues on cloudwithchris.com. I’ve been working on making the site more accessible, and I’ve also been working on making it more inclusive. In this blog post, I’m going to outline some of my findings, the tools that I used to identify those, and how I’ve worked to fix them. This is an ongoing project, so I’ll provide further posts as it makes sense.

How we got here

Diversity and Inclusion is an important topic to me. You’ll have seen it recently feature on the show, with an excellent session from Melissa Jurkoic. I’ve also recently read the book Measure What Matters by John Doerr, which talks about using OKRs (Objectives Key results) to drive vision and focus towards a common goal. My focus on Cloud With Chris has been grass-roots and organic so far, and has done well. Though, I’m now at a stage where I want to be more intentional and targeted with what I do.

With that, I have several objectives - but I’ll be focusing on one in particular in this post. The objective is Objective: Cloud With Chris is recognised as a platform for all.. Yes, it’s bold. Yes, it’s ambitious. I won’t go into detail on all of the Key Results that I’m working towards (as this could become a very lengthy post - so I can potentially break that out into a separate one), but we will focus on one of those Key Results. Key Result: Cloud With Chris theme should 100% conform to accessibility standards by end of September 2021.

So we have a vision, and we have a quantified goal. Let’s get started.

How do we find out the current state?

Firstly, we need to understand the current state of accessibility on the site. This isn’t an area that I had typically explored in the past, so started with research. I had recently heard of Microsoft’s Accessibility Insights project. The product comes in a few flavours (For Web, For Windows, For Android). As we’re talking about a Web site, I decided to use the Web version (which is available as an extension for Chrome and the new Microsoft Edge).

Once installed, you’ll see a new icon in the top right of the address bar. Clicking on this will show you a number of different ways to search for issues. As I mentioned, I’m still going on my journey here. However, I’ve used the FastPass functionality to find some of the most common accessibility issues.

This FastPass feature scans your site, and in less than 5 minutes will identify some of the common accessibility issues which exist on your site. Fortunately for me, I built the Cloud With Chris theme, so I can actually take action on the issues that I’m seeing. If you’re using a theme made by someone else, you may have less control (but could be a great contribution, if they’ll allow it!)

Not only does the FastPass feature list the issues with the web page, it also visualizes them on your site, by putting boxes around the offending site elements. Some of my findings included -

These issues are available with examples on the accessibility insights page. Let’s break down what each of these mean in separate sections.

Why should we care? The web is a visual medium, and colour is important. We often think about it from a branding perspective. But it’s even more important to make sure that the text on the page is readable. Have you ever thought about how people with visual disabilities, low vision, limited colour perception, or presbyopia might be able to read the text on a web page?

This information is fully documented over on the Accessibility Insights web page.

I navigated through various pages, hunting down any colour combinations that were lower than the minimum contrast ratio of 4.5:1. This included individual code snippets (not code blocks); the pink colour on the background didn’t have a high enough contrast to the background. I believe I have caught all of these now, so this should now be fixed.

Links not accessible for screen readers

Some of my navigation links include dropdown functionality. For example, the “Episode” page has a dropdown menu, which allows you to navigate between Past or Upcoming episodes. These links were not as accessibl as they could be.

This was a very small code change, with a big impact. Below is an example;

From using an ID on the anchor tag, and aria-labelledby on the unordered list with a value of navbarDropdownMenuLink (which was used across all dropdown lists on the site).

Similar to the link issues, I had some videos on my site that were using the <iframe> tag to embed YouTube videos. These videos were not accessible for assistive technologies. There is another example for frames or iFrames, and shows that a property of either title, aria-label or aria-labelledby needs to be added.

This means, I could make a single fix in one place, and it would affect all episodes on the site. It was once again a simple tweak. After adding a variable for the title of the episode, I had to change a single line of code in the episode layout.

Notice that there is no title attribute on the iframe? I have that information in the episode’s YAML frontmatter, so just needed to inject it in to the iFrame as below.

This was once again a simple fix, with a big impact. I’m happy with it.

So, the problem isn’t with my site design at this point, but is in fact how Hugo generates codeblocks. From looking into the accessibility insights explanation, it looked like a fairly simple fix (adding tabindex=“0” to any generated codeblocks). While it’s a simple fix, there is a problem. I don’t know the Hugo codebase, so I’m not sure where the fix would be best applied.

As a good open source citizen, I felt it was my responsibility to at least raise this as a GitHub issue in the Hugo project. I’m pleased that within hours of it being raised, I was told that there is already an issue being tracked (my bad for not finding that one!). Not only an issue being tracked, but a Pull Request had been created by another community contributor to fix the problem. Going one step further, the maintainer of the project merged the request soon after the discussion on my issue took palce.

So, while I didn’t directly write any code - I have helped contribute an accessibility fix to the Hugo project. Something I’m incredibly pleased of! I haven’t seen a new version of Hugo since the PR was merged, but I’ve no doubt it will come very soon. I’ve said it many times before, and I’ll say it again - Hugo has a brilliant community which supports it, and I’m very happy to be a part of it.

Are you involved in Open Source? How often do you show your appreciation to others? You should! Even if you’re not the one writing the code or part of the project maintenance team/leadership, it’s still important to show your support.

So, this fix is not yet live on the site. But, as soon as the new hugo version is available, I will be upgrading so that the code blocks are accessible.

By no means am I the only one who has come across accessibility issues on the web. And I’m by no means finished with my accessibility journey. But I’m happy to say that I have addressed all of the issues I have come across, and I’m happy with the progress I have made. There is more to be done, and it’s on all of us to make the web a better place.

Until the next time, thanks for reading and good luck with your accessibility journey!

One of my recent tasks for Cloud with Chris was to investigate some additional areas for SEO optimisation. If you’re unaware, SEO stands for Search Engine Optimization; a set of practices to improve your ranking in search engines such as Google, Bing and others when they crawl and index your site. I was already in a good position, but there were some things that were frustrating me, we’ll explore those in this blog post.

JAMStack and the Cloud - A winning combination

When I mention the term JAMStack, I’m not pretending that I’m Paddington bear with a stack of Jam sandwiches! If you hadn’t heard, JAMStack is a term that describes applications based on JavaScript, APIs and Markup. That means, we’re referring to files that are content in nature. Think about files like HTML, CSS, Images, etc. Ok, now with that context - why has it risen in popularity? Surely this is something that could have been done for many years, so why now? My hypothesis… Cloud. 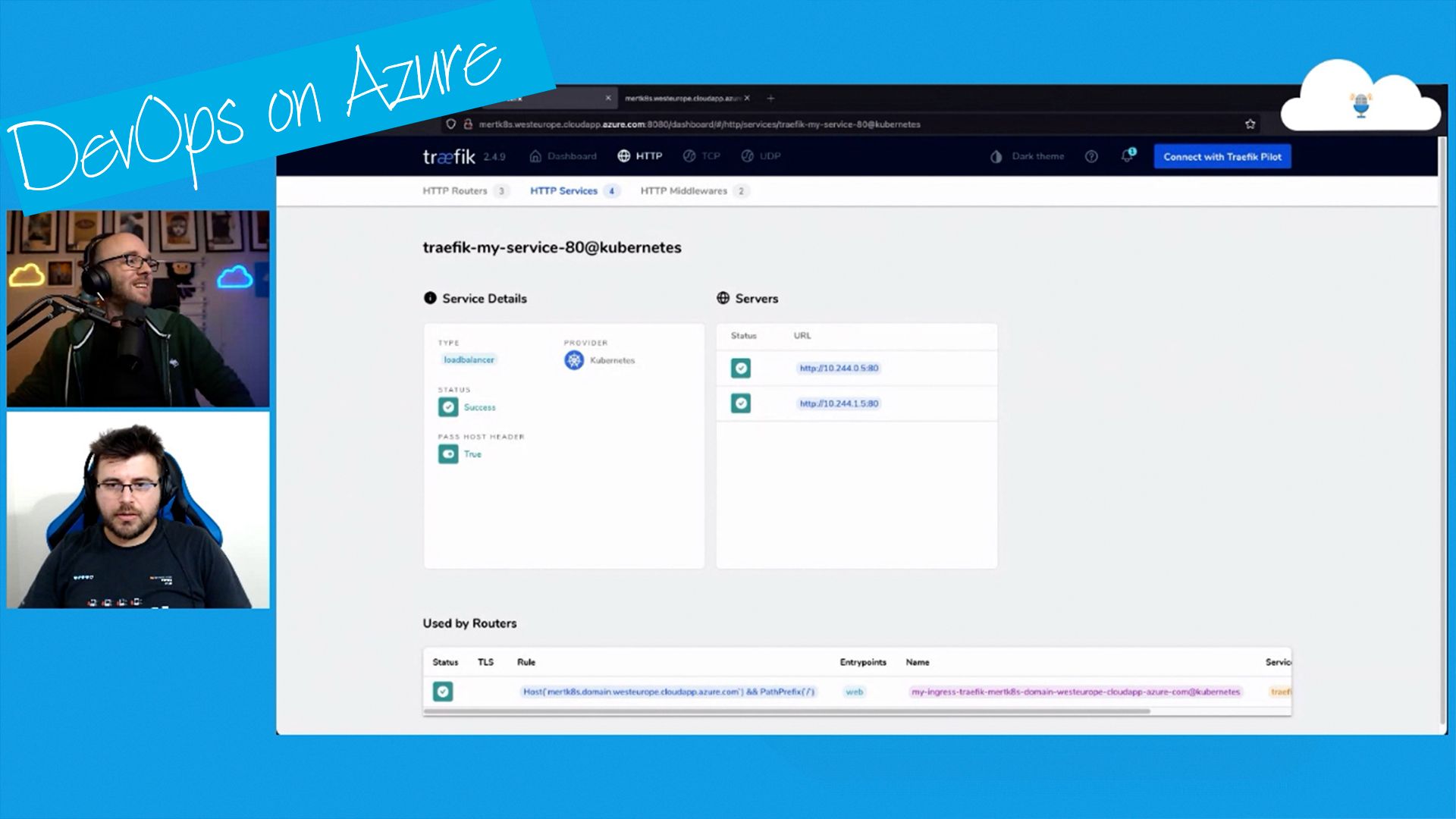 In this episode, Chris is joined by Mert Yeter, a software engineer with 16 years of experience in .NET and Microsoft technologies. We’ll be talking all things DevOps on Azure, including Azure Container Registry, Azure Container Instances and Azure Kubernetes Service. We’ll also get a chance to talk about Traefik and how it’s pluggable middleware can help you with your Kubernetes ingresses! Tune in to find out more!