I’m amazed that as I’m writing this, that Windows Terminal is almost two years old now! Windows Terminal was first announced in May 2019 in an early release stage, and later available in preview that Summer through the Microsoft Store. Windows Terminal is a modern app, decoupling the concept of a terminal and a shell, allowing you to spin up the shell that you prefer to use in a friendly, fast and productive terminal environment.

It’s come a long way since the early days. To get an idea into the progress, scroll through the release notes and you’ll get an idea! Speaking of which, the project is open source and available on GitHub. You can either raise an issue directly in the GitHub repository, or if you’re more inclined to make a contribution, then you can submit a pull request, though make sure to read the Contributor’s Guide first!

As the name implies, Windows Terminal is only available on Windows. From this GitHub issue, it appears as though there is a dependency on components that are only available in Windows, hence no support on Linux/macOS at this time. So, pre-requisite number one is that you are running a machine with the Windows Operating System!

The preferred / recommended way of installing is by using the Microsoft Store, as you will be able to update to the latest version of Windows Terminal through the Microsoft Store updates mechanism. However, it’s also available through the Windows Package Manager CLI (winget), Chocolatey (unofficial), Scoop (unofficial). If you’re so inclined, you can even build it manually from the GitHub Source code - all of these options are detailed in the GitHub repository.

When you launch the Windows Terminal, you should see a view similar to the below:

TIP: Remember that Windows Terminal is just that - a terminal. You can interact with shells through this application (e.g. Windows PowerShell, PowerShell Core, Windows Subsystem for Linux, Azure Cloud Shell). So, for example - if you don’t yet have Windows Subsystem for Linux (WSL) installed or PowerShell Core installed on your system, then you won’t see those as profile options within Windows Terminal.

I’ll likely put together a separate blog post at a later point on installing and using WSL, as I’m a big fan of the feature. I find myself using Ubuntu as my primary command-line environment for most activities these days. Given that I have an M1 MacBook Pro arriving this week, I’ll likely continuing working in the Linux environment for my own sanity!

For me, the magic behind Windows Terminal is the profiles. You can have multiple tabs open at the same time, and switch between those views. So, easily cycling between PowerShell and Ubuntu or Azure Cloud Shell and a local Windows Command Prompt.

TIP: If you hold ALT while clicking on one of the profiles, then the alternate profile will open within the same tab. See an example below.

This setting area allows you to customise the appearance, the colour schemes and more of your Windows Terminal. More importantly (from my perspective), it allows you to create, update and delete profiles (Though I don’t believe the UI allows you to delete the pre-made profiles). Why do I think the profiles settings are the most important? Well, did you notice something interesting in the first screenshot of this blogpost? There are two profiles relating to Virtual Machines!

When you create a profile, you can go ahead and specify a command-line activity to run. For example, Windows PowerShell runs powershell.exe, Ubuntu runs wsl.exe -d Ubuntu-20.04. But what about SSH?

TIP: Did you know that there is an OpenSSH Client available as an optional feature in Windows 10? You can find out more in this article on how to get this setup. This will allow you to use SSH directly within Windows, rather than needing to use Windows Subsystem for Linux.

Now, if you read the tip above - You’ll now be realising that you in fact have a couple of ways that you can use SSH within Windows Terminal. Either by using Windows Subsystem for Linux, or directly within Windows if you have the OpenSSH optional feature installed. For you eagled eyed readers, you may have noticed in the first screenshot that I have both options configured!

You’ll notice from the above image, that it’s actually a fairly simple configuration -

The experience will work exactly as you expect. If you have a private key held in your .ssh folder, then you’ll be able to use this in the respective environment. So for example, as I have both OpenSSH on Windows 10 installed, as well as Windows Subsystem for Linux, I have to have my keys available in the appropriate environment (either WSL, or Windows 10). From the screenshot below, you’ll notice that I have different keys available in the different environments to illustrate the point.

Another great feature of Azure Cloud Shell is the ability to persist your files across sessions. When you first create an Azure Cloud Shell instance, you’ll be prompted to either create or attach it to an existing Azure File Share in Azure Storage. The home directory is persisted in the file share (as an .img rather than as individual files), but beware - files outside of home are not persisted across sessions.

So let’s just recap - In Windows Terminal, you can have a wealth of options available to you at your fingertips - Linux Environments, PowerShell, PowerShell Core, Windows Command Prompt, Access to Azure Cloud Shell with several common tools already installed, or easily running commands such as SSH by simply opening a profile, to connect to a Virtual Machine. I’m a huge fan of Windows Terminal, and would say I have it open on a daily basis appearing somewhere on my desktop. I’d encourage you to try it out, and have it as a friendly companion on your desktop too!

So, what are your next steps after installing it and setting up some profiles? I’d certainly suggest taking a look at the Azure Docs, particularly on using Powerline for example. Scott Hanselman also wrote a brilliant blogpost on this, which is a common reference article that I use.

Are you a Windows Terminal Fan? How are you finding it? Any tips? Let’s continue the discussion over on Twitter @reddobowen, for all to join in and participate! So until the next blog post, thanks for reading - and bye for now! 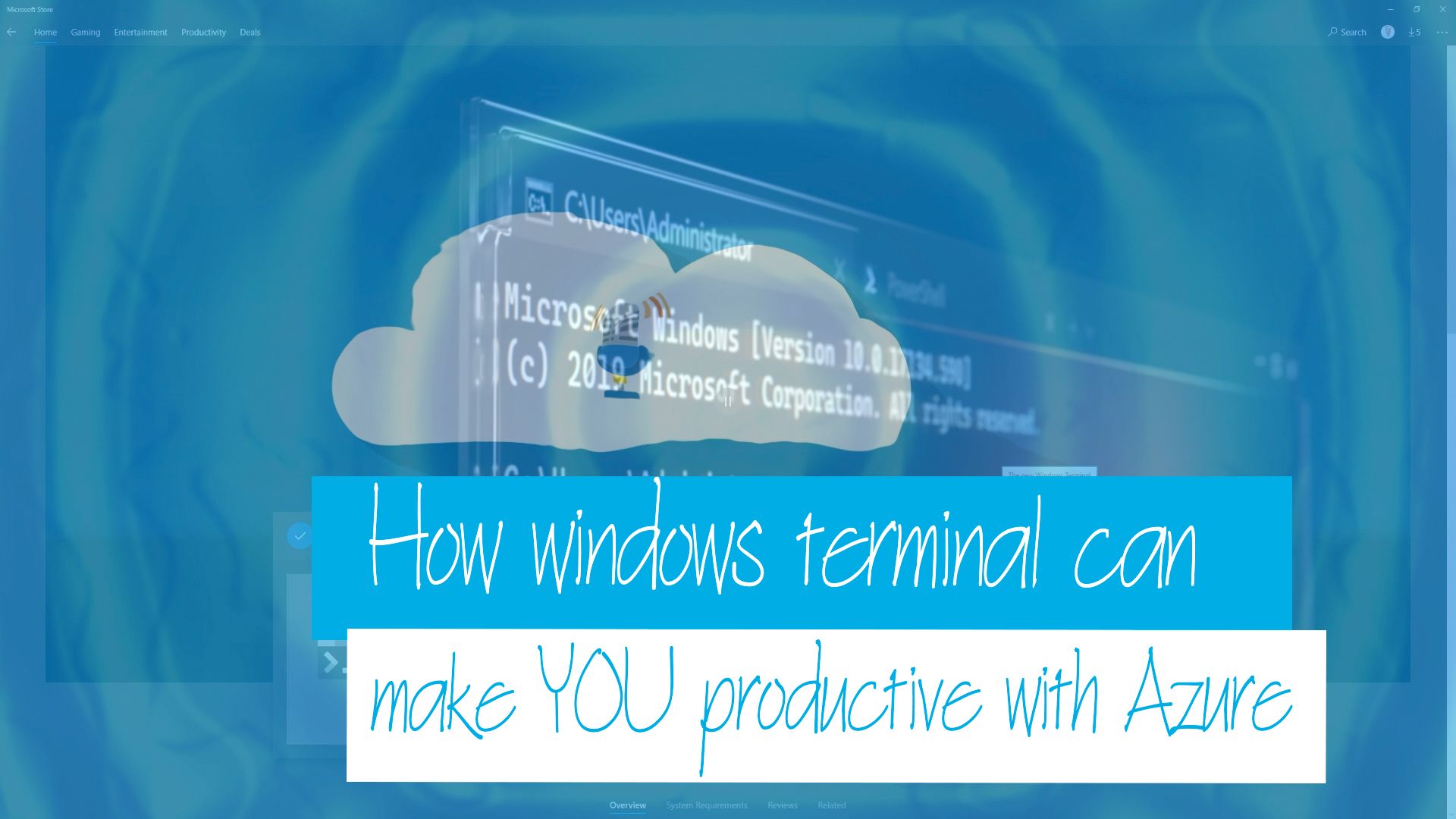 Cloud Drops - How Windows Terminal can make YOU productive with Azure

Windows Terminal is a modern application that allows you to use your command-line of choice, whether that is the Windows Command Prompt, PowerShell, PowerShell Core, Windows Subsystem for Linux or the Azure Cloud Shell. This Cloud Drop shows you how to install Windows Terminal, and some tips/tricks in making you productive in Azure!

Why use Git, How it Works and what's going on behind the scenes?

I’ve recently released a few Cloud Drops episodes on Git related content. The Git Behind the Scenes video was incredibly well received. I’m also aware from my day-to-day discussions that there’s a mix of experiences with Git, so also made a Git 101 Video. In this Cloud World that we live in, version control is an important concept beyond the ’traditional’ developers. Infrastructure Engineers can now version control their Infrastructure as Code, or maintenance scripts. Data Scientists can version control their experiments and tests. And of course, developers can version control the code for their software. I also consider version control as a gateway or first step into the world of DevOps. Typically when you think about build and release pipelines, you are triggering based upon some version control event (e.g. a commit to a particular branch, a merge of a pull request, etc.). Over the past few years, I’ve seen a trend where organisations are looking to automate quickly, rather than relying on the traditional hands-on-keyboard approach which can be error-prone and time consuming. Whether we’re talking in this context about Infrastructure as Code, Application Code, database schemas as code, data science experiments or any other representation as code, it doesn’t matter. Typically the roads lead back to the same place, to version control. So in this blog post, I’ll be covering the fundamentals of Git and how to get started. For anyone that is particularly inclined, there will also be some information on what’s happening behind the scenes when you work through these fundamental concepts.